Beocontrol on the territory of Belgrade, has 20,000 m2 of closed and 70,000 m2 of open storage space in the function of public and customs warehouses. This is one of the few warehouses used as a heavy cargo customs terminal. In these warehouses, storage operations and port services of transhipment of foreign and domestic goods intended for export or import can be performed. Unloading, loading, storage of goods under customs supervision, the procedure of customs warehousing and measures are carried out in public customs warehouses and measures are taken to preserve the condition of goods. 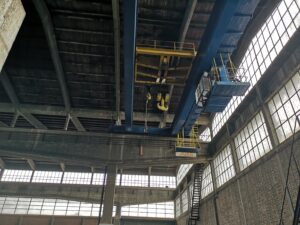 The warehouse is a multimodal hub (water, road and rail) in the vicinity of the warehouse. The advantage over the rest of the competition is that our confectionery is multimodal, easy to store and reload sheet metal, containers, salt, oversized, cereals, pipes, coal, heavy terriers and other goods. The public customs warehouse is of the allowed height so that a truck can enter it, and loading or unloading can be done immediately on the spot. We are the only one in Serbia to have a crane that allows easier and faster handling of goods.

The customs terminal for heavy loads (container terminal Serbia) is located on an area of 16,000 m2 and has an average load of 7.0 t / m2; It is intended for ferrous metallurgy products in reels, rods, ties. As for piece cargoes and General cargoes, Containers; Investment equipment. The bearing capacity is 10t / m2. 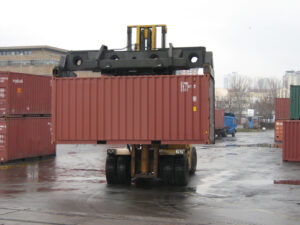 The halls open onto the water with their canopy, and the canopy leans against the pillars on the edge of the vertical quay and is an integral part of the vertical quay. Each hall consists of a warehouse space of 4300m2, which is used for public storage, and a covered space of about 2800m2, which is used for cargo handling and movement of road, rail and river traffic. The load capacity of the substrate in the warehouse and operational shore is 10t / m2. Through the covered part of the front halls (under the canopy) pass two submerged industrial lines for railway traffic type S-49 with a permissible axle load of 200KN, as well as road traffic for traffic on the operational shore.

In one hall there are 2 (two) bridge cranes with a carrying capacity of 50t and 3t, while in the smaller hall there is 1 (one) bridge crane with a carrying capacity of 20t. The cranes move on cranes that are integrated into the construction of the hall. The movement of the elevator is from the storage part of the hall, where the goods are stored, through the covered part through which the road and the railway pass, all the way to the water that covers the unloading / loading of the ship.

General cargo, heavy container cargo and oversized cargo are manipulated in the halls by bridge cranes. The goods are captured by bridge cranes over the covered part of the large hall, which enables work in all weather conditions.

CUSTOMS CALCULATION OF GOODS PLACED IN THE WAREHOUSE